The rich and fertile soil, as well as the climate of our region have favored the production of superior quality products, dating since ancient Greek times. Many historical references speak of our region as a fertile haven with enriched fruitful lands and tasty products.

The uninterrupted cultivation, the know-how and the continual development of small family businesses has helped in the qualitative expansion of the production of fresh produce This has continued to be influenced by modern practices and regulated cultivation.  Our country continues to provide branded products with premium identity, good quality and reputation.

Since antiquity, the olive oils of Monemvasia and its wines have been of renowned quality, that being true until today. In recent times, fruit, citrus and vegetable crops have been recognized by credentials of excellence.

The typical Mediterranean climate of Laconia as well as its varied soil altitude are two of the factors that have contributed in the cultivation and development of a variety of special products. A noteworthy example is Malvasia Wine* (aka Malmsey or Malvasoia), famous to have hekld a prevalent place within the courts of kings throughout Europe an to represent one of the most popular eldest varieties available on the market (Le Livre des cépages. Hachette, Paris, 1988). 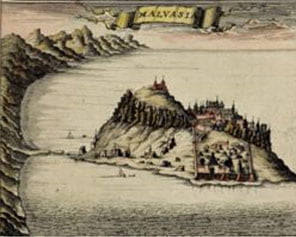 * HISTORICITY OF THE PROMINENT “MALVASIA WINE”

Monemvasia (the name of the castle city in Laconia) was a medieval and early Renaissance Byzantine rock fortress surrounding the area of Southern Peloponnese. It is this coastal port that acted as a trading center for the renowned wine produced in these parts of Peloponnese. Malvasia (also known as Malmsey by the British and Malvasoia by the French) became the most famous wine of the 16th Century for its rich, sweet and fortified consistency It is thus one of the eldest varieties represented on the market (Le Livre des cépages. Hachette, Paris, 1988).

During the Middle Ages, the Venetians became so prolific in the trading of ‘Malvasia Wine’ that merchant wine shops in Venice were known as malvasie.
The wines produced in the region of Monemvasia were a major export to the rest of Europe. From the 12th century and for five hundred years Malvasia wine dominated the Eastern and Western markets; never before was a wine so famous for so long. The domination of the Greek ‘Monemvasia-Malvasia’ lasted from the 12th century in the Byzantine city of Monemvasia and continued under Venetian rule until the middle of the 17th century. Its heyday ended with the Turkish occupation of Monemvasia, which resulted in the destruction of all vineyards on the peninsula. However, in Europe the name continued to be exploited for various non-related grape varieties and Malmsey incorrectly became associated with wines from Madeira. 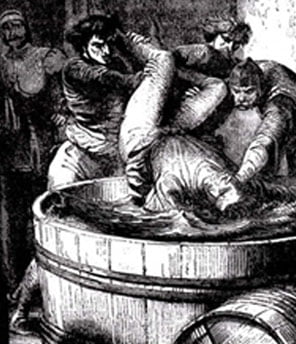 To demonstrate how famous this wine became, William Shakespeare reflected on its magnificence and left it as an aspect of his legacy by mentioning it in three of his works Love’s Labours Lost and in Henry IV Part 2. His most infamous mention however was in Richard III.

The play suggests that King Richard III ordered the execution of his brother The Duke of Clarence, who had plotted against him with the Lancastrians. Instead of a public execution, after his brother asked for a cup of wine while being incarcerated within the Tower of London, he was answered: “you shall have wine enough, my lord, anon”. His mythical drowning is rehearsed in the play, when his assassins hatched a plan to drown the Duke within a barrel full of Malvasia wine: “Take him on the costard with the hilts of thy sword, and then throw him into the malmsey-butt in the next room” yelled the King.